From and with permission of Marathon & Beyond. For more information about this bimontly magazine, visit www.marathonandbeyond.com 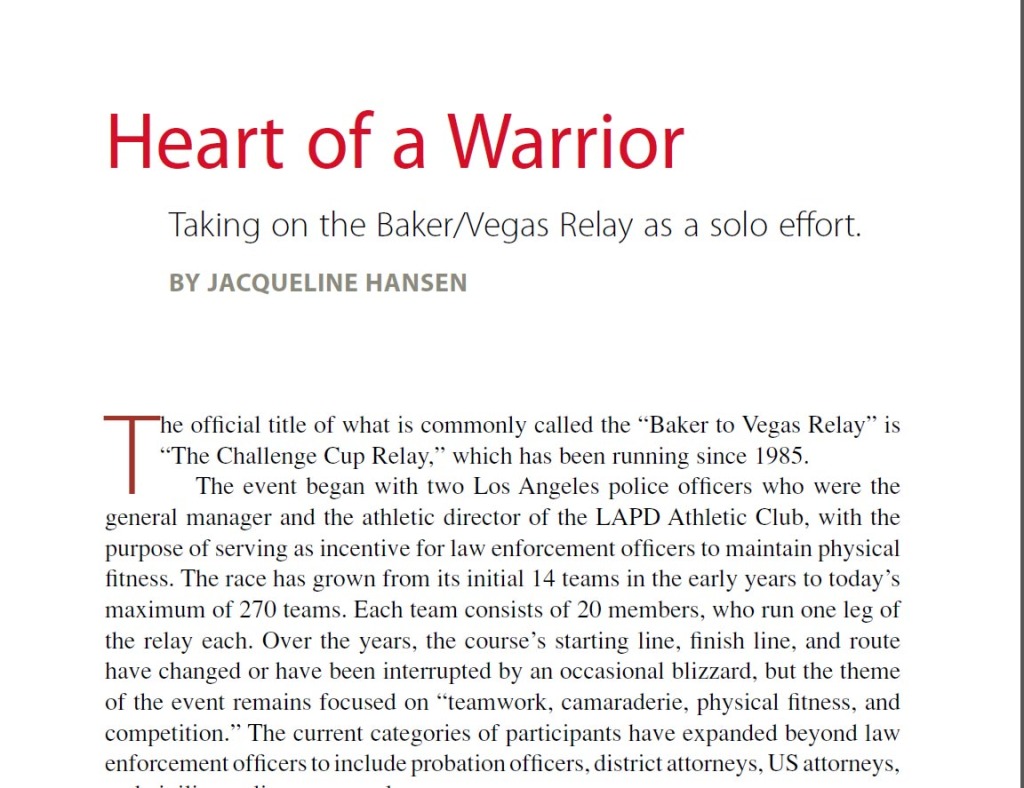 Six years ago, Brian Keltner was an overweight couch potato, and happy about it. Now, the founder and CEO of Warrior Hearted can’t imagine not being active. What sparked the change might surprise you.

Keltner, a member of California law enforcement for years, found true inspiration in his own son, who was born with special needs. After watching his son struggle daily, Keltner realized that if his son could face such challenges, so could he. Since then, he has set about conquering one athletic feat at a time, with the goal of using his own accomplishments as a platform for raising awareness about children with special needs.

“I started off just walking for 20 minutes, three times a week,” Keltner told ActionHub. “It kind of snowballed from there. The next thing I know I was running a 50k Ultramarathon through the mountains thinking ‘this is completely awesome.’”

On March 22, Keltner ran the 120-mile stretch from Baker, California to Las Vegas, Nevada in under 30 hours. To complete such a run is a tremendous feat in itself, but to Keltner and team Warrior Hearted, this event will be the foundation’s first major media push…

Annually, law enforcement officers from around the globe battle it out every Spring in the world’s most prestigious and unique law enforcement foot race called the Challenge Cup Relay, more commonly known as Baker to Vegas. Starting in Baker, California and ending in Las Vegas, Nevada, it’s a 120 mile relay with 270 teams competing for the coveted cup trophy.

This April, Sheriff’s Special Officer Brian Keltner ran the entire Baker to Vegas race solo (all 120 miles) to raise awareness for the Warrior Hearted Special Children’s Foundation. Below is a recounting of the experience, and the source of his inspiration in his own words.

In thinking about my motivations, I would have to back up about six years.  I used to be an overweight couch potato. I had grown comfortable in my lack of activities and size.  I spent most of my time frustrated in dealing with my then three year old son and his special needs.

Through encouraging his growth, I challenged myself to grow as well…  [continue reading at OCSD Newsroom]